What Are The Traditions of “Noël” French Christmas? 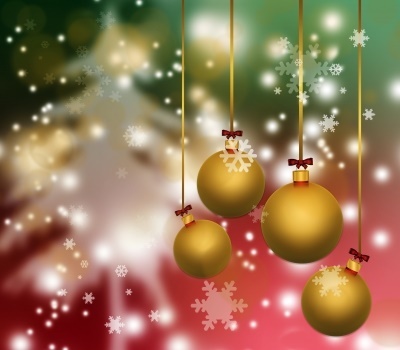 Christmas time “Noël” in French, is a wonderful time of the year in France.

Christmas season in France actually starts on December 6 with Saint Nicolas’ day (in the North) until January 6 “la fete des Rois” which I’ve written a post about a year ago.  So, Christmas season really last a whole month.

Besides summer vacations, this time used to be my next favorite time of the year.

Even though it’s the same holiday, celebrated on the same date as it is here in the US, there are few small differences between the way Christmas is celebrated here and Noël is celebrated France. In this post I wanted to tell you about little differences.

So, let take one Christmas item at the time and see what it’s all about in France. 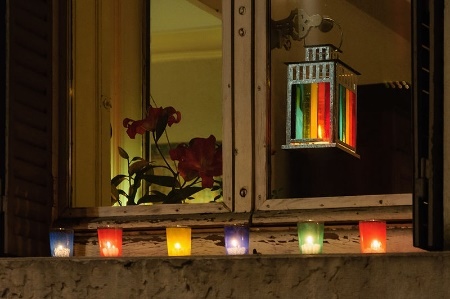 Where I’m from, in the Rhone Alpes region, we do not give gift on December 6th, as this is more of a Northern region tradition, but we do illuminate streets, stores and houses on December 8th because this commemorates a very special occasion, which belongs only to the city of Lyon and it’s surrounding. This is called “La Fête de la lumière.”

Here is the story…

The tradition wants that every house puts a line of candles in a glasses on each window sill, at dark. And every store and whole cities, towns and villages illuminate.  I remember how my family used to put candles in glasses on the 10 front windows of the house. That was really beautiful. 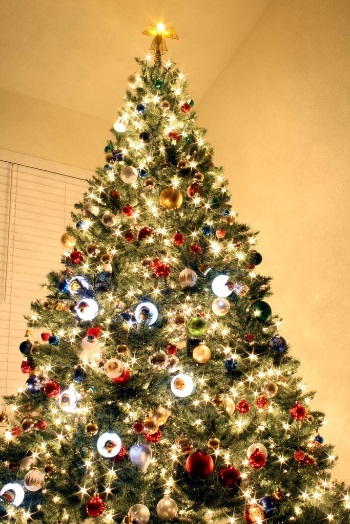 The Christmas tree called « le sapin de Noël » in French is as popular in France as it is here in the US, and people starts putting their tree up in their house at around the time they start celebrating, which as I mentioned above is about December 6-8.

For me and my brother, the decoration of the sapin de Noël was such a fun time.  My mother would let us do that on our own and helped when we needed it.  She always bought a huge fresh tree, and it was up in the house for about a month.

In the village I grew up in, the mayor also put a huge Christmas tree in the “downtown” area.  All cities and villages put on decorations and Christmas tree at this time of the year like they do here.

The literal translation in French for Père Noël is “Father Chritmas”, or “Papa Noël” “Daddy Christmas”.  Le Père Noël looks just the same in France as it does here; an overweight old man with a white beard and a red and suit, and hat.

I believed in Santa Clause the “Père Noël” until I was 7 years old when I started to question this thing.  However, my parents were so clever at this and made it so magic that I truly, truly totally believed that someone came over night and nicely deposited all those toys at the bottom of the tree. (Most of them not wrapped which made it look even more magic). 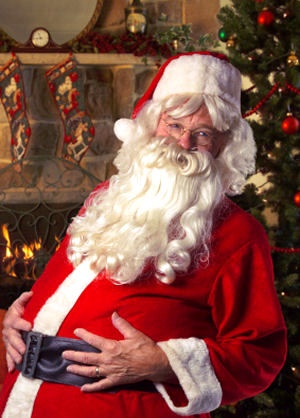 We kids were so sound asleep when my parents, uncle and aunts were carrying the toys from the attic to the tree downstairs that we never knew what was happening.  All we knew is that we’d wake up and the living room looked like a toy store. We were always at least 5 kids and a couple of years there were 8 of us with at least 5 to 6 toys each (some huge), so you can imagine how it looks.  Yes, just like a toy store.

More on the magic below… 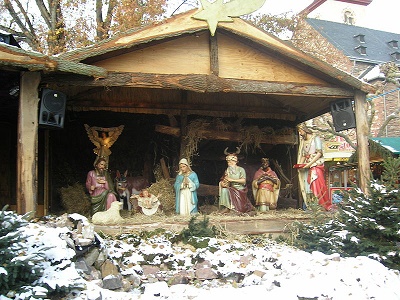 Something that is a bigger part of Christmas in France than it is here, is “la crèche” which is a representation of Jesus birth with Joseph, Marie and the Magi. We call those figurines “les santons.”  This side of Christmas is not so obvious in the US, but in France almost everybody has a crèche along the Christmas tree in the house.

Le réveillon is big in France, and it starts in the evening as far as the celebration goes, but the whole day is dedicated to preparing the delicious food that will be eaten later.

I remember my childhood years, helping my mother preparing the food and desserts for this wonderful time of the year.  A very old tradition of the réveillon dinner is to serve “les 13 desserts de Noël” (the 13 desserts of Christmas) especially in the south of France, which I wrote about last year at this time.

The réveillon in my household was out of this world, with all sorts of holiday foods, fruits, chocolates, marrons glacés, best wines and real champagne, of course.

We really stuffed ourselves up on that day. One year I ate so much chocolates that I got an indigestion.  Just for a short time the thought of those chocolates would make me so nauseous.

Christmas day starts rather early as children are waken up at day break or before in the excitation and expectation of new toys and wonderful gifts.

To this day, that morning of Christmas day is the most magical moment I’ve ever lived. On Christmas morning me, my brother and cousins would walk to a sea of toys around the Christmas tree and just about all over the living room.

On top of that, my aunt would start her super 8 camera with the brightest flash one had ever seen, and that light reflecting on the toys made it look like magic. I tell you, when you’re a kid and you see this, it’s just magical.  That brightness and the discovery of many beautiful surprising toys would not only make a kid’s day, but you would remember it forever.  That’s why I do.

When gift opening time is over it’s time to get ready and all dressed up for Christmas dinner, which is more like Christmas lunch in France as it tends to last for hours in some household. 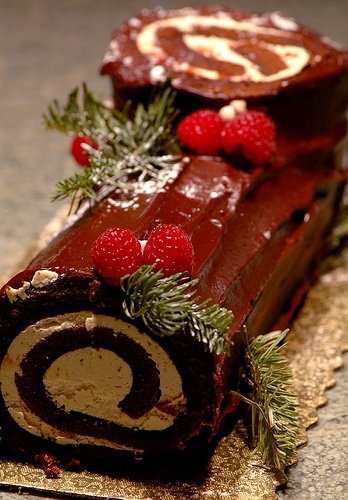 Christmas dinners in France tends to be very, very rich, with like 3 appetizers, and a huge main course, followed by the “plateau de fromages” (cheeses’dish), la bûche de Noël, chocolates, wine and champagne.

La bûche de Noël is a cake that you’ll see in French patisseries only at Christmas time.  It’s a log-shaped cake made of a flat sponge cake that is rolled with chocolate cream (for the most part).  It’s then decorated to look like a log.

I hope this was a nice trip to Christmas in France. Please, leave your comments below.

9 thoughts on “What Are The Traditions of “Noël” French Christmas?”