Paris The City Of Light 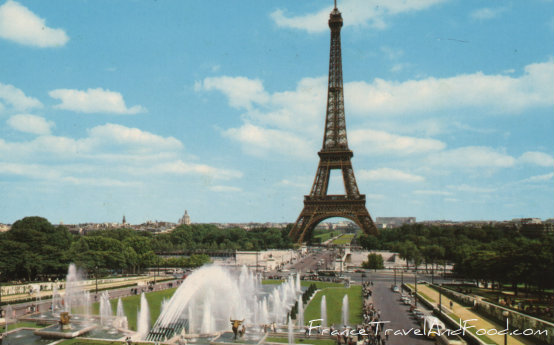 First off, I hope that you can finally SEE my new header.  I just love to see my very own pictures of food and places up there.  Then there is the cartoon car, plane and train that just look great and fun. All together I think it really represents what this blog is about and that was the goal. At the end of the post, please, let me know what you think of it .

Believe it or not I had no post of Paris, yet on this blog. So after having written a post about how to travel with Paris subway, here is a post about Paris outside of the metro.

Even though I am from Lyon, I lived in Paris just over five years, from October 1987 to January 1993 when I moved to New York City.  I moved to Paris to pursue my drama studies, and lived in a studio in the 18th arrondissement.  Even though I was some distance from the Eiffel Tower I could still see it from my balcony.  Since for some reason I’ve fell in love with the Eiffel tower since the first time I saw it, it was the first thing I’d look at every morning when I work up.

Paris the Capital of France

The climate is cooler in Paris than it is in Lyon and on average a good 10-15 degrees average cooler than Marseille in the south of France.

Paris is a real center of art with its most visited art museum in the world, the Louvre. Paris is also the capital of fashion where all the most famous French designers have their quarters and stores. And the city with the largest subway system in the country.

And let’s not forget, Paris is the host of what has been called the most beautiful avenue of the world, Les Champs Elysées and the incomparable Eiffel Tower which dominates the city from its 300 meters (985 ft.) and has become the icon of the whole country.

Paris has seen quite some history, and it’s actually a miracle that the major buildings which are literal landmarks of French history have not been destroyed during world war II as the Germans attacked the city in June 1940. 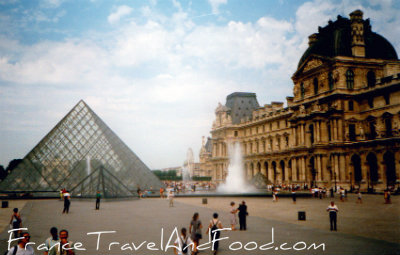 The Louvre was built around 1190 as a defensive fortress by king Philippe August. It was then transformed into a more modernized dwelling (a chateau) before becoming the sumptuous palace of the Sun King, Louis XIV.  It became a museum in 1793.

In 1981 President Francois Mitterand started the Grand Louvre Project, and an ultimate modernization and extension of the present Louvre was born with an open new wing which was used to house the ministry of finance. During this last modernization of the Louvre the famous glass pyramid was born with much critics at the time saying that this mixture of modern still next to an historic building was a big mistake. 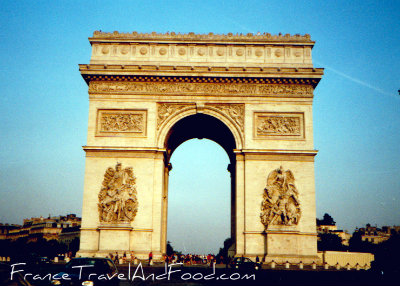 The Arc De Triomphe is a commemoration of Napoleon’s victories commissioned by himself. The construction of the arc started in 1806 and was complete 30 years later in 1836.

The Arc de Triomphe is located at the very top end of the Champs-Elysées, in the center of the Place Charles de Gaulle, better known as “la place de l’étoile” (the star plaza), because of the 12 avenues merging together there and forming a gigantic star (étoile).

You can climb the 234 steps of the Arc de Triomphe (there is no elevator) and get to the platform where you can observe a superb view of the Champs Elysees and much of the city.

The Arc is positioned in such a way that when facing the Champs Elysées towards the Concord Plaza you can observe the Obélisque in the a perfecty straight line accross.  The view is magnificent.

Beneath the Arc de Triomphe is the Tomb of the Unknown Soldier that honors French fallen soldiers from both World Wars.

The Eiffel tower was built in commemoration of the centenary of the French Revolution for the World exhibition of 1889. The construction started in 1887.  It took some 300 steel workers to build this giant tower that is now overlooking the whole city of Paris.

There were 700 proposals submitted for the special construction and Gustave Eiffel (the creator of the tower) was unanimously chosen as it included a petition of some famous names of the France of the times which included Guy de Maupassant, Emile Zola and Charles Garnier, architect of the (Opera Garnier) in Paris.

The Eiffel tower has three stories and is 300 meters high, 320 with its antenna, and weighs 7,000 tons. The Eiffel Tower was the tallest building in the world until 1930. Its height varies up to 15 cm depending on the temperature. The tower is taller in the summer as its metallic structure expends in the heat.

The First Level of the Eiffel tower is up 360 steps by stairs or can be accessed with the elevator. The first floor has a small audio-visual museum showing historical film footage of the tower.

The Second Level up 359 steps from the first level includes a fine french food restaurant which offers a superb panoramic view of the city.

The Third Level is a platform which offers the best view of Paris, as nothing is higher than you are when you are standing up there.

Incredibly, the tower was supposed to be demolished in 1909 as its permit expired since it was an exhibition temporary building. Yes, the Eiffel tower was a temporaty building. Interestingly, It’s the tower antenna that saved the tower from being destroyed because it was used for multiple purposes including the military.

Even though from afar the tower appears to be gray in color it is painted with several shades of brown.

At the time the tower was built many people were shocked by its daring shape and Eiffel was criticized for the design and accused of trying to create something artistic with no regard to engineering security.

However, Eiffel and his engineers, were renowned bridge builders who understood very well the importance of wind forces and knew that if they were going to build the tallest structure in the world they had to be certain it would withstand the wind. Therefore the primary concern of Gustave Eiffel was wind resistance.

Eiffel designed the tower in such a way that it is mathematically calculated and gives an impression of strength and beauty which has lasted up to our days.

Today the Eiffel tower is one the world’s most visited sites by tourists. If you get on the elevator that will take you up to the third floor you will experience a very unique sensation of flying upward to the sky living the ground far under. If you have a fear of heights, though, I do not recommend that you do so. 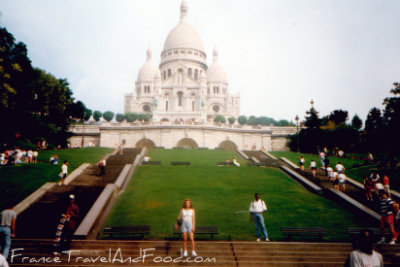 Le Sacré-Coeur is a very famous church located in and area called Montmartre.   Monmartre is the famous spot where artist painters are gathering on side walks and cafes since 1880. To this day Montmartre is a real market place for artist painters who are selling their art on the sidewalks.

The name Montmartre (an area around a hill in the 18th arrondissement, north of downtown Paris) is said to be derived from the terms Mount of Martyrs or from Mount of Mars. Until 1873, when the Sacré-Coeur was built on top of the hill, Montmartre was a small village, inhabited by a mostly farming community.

The Sacré-Coeur (Sacred Heart) was built in Romanesque style.
This massive building has managed to keep its beaming white color even as  in the air has gotten more polluted over time.

This can be attributed to the Château-Landon stones which were used for the construction of the Sacré-Coeur. The stones with which the Sacré-Coeur was built are very special and react to water by secreting clacite, which act as bleacher. So, every time it rains the stones of the Sacre Coeur are getting their whiting bath. this doesn’t mean that mother nature doesn’t need a bit of help once in a while. The Sacre Coeur was cleaned in the late 1980’s and it’s true whiteness was more beautiful then ever.

Next to the Eiffel Tower and the Arc de Triomphe, Notre-Dame probably is the most easily recognizable building in Paris.
This church was Built between 1163 and 1300. It took over one hundred years for the Gothic masterpiece to be completed. The 102 feet high building is a masterpiece of sculpture and prodigious design.
Inside you can admire the numerous windows and works of art. 255 steps will take you to the famous square shape towers through the”Gallery of chimeras”, which was added during the course of the restoration program that began in 1845.  Notre Dame is also famous for its numerous gargoyles and funny-looking chimeras where, unfortunately, a gird had to be added to stop people jumping down to their death. Yes, the Cathedral was becoming infamous for suicidal jumping.
Once you’re there, take another 147 steps and you will be able to see the huge Cathedral’s bell named Emmanuel. The bell weighs 28,000 pounds and is very impressive.

If you know about Victor Hugo’s story “The Huntchback Of Notre Dame” this site will without a doubt remind you the famous story.

There are many, many more places, monuments and museums to visit in Paris, but I can’t possible name them all here on this post. So watch the video for more…

In the future I will dedicate antoher post to museums only.

Leave your comments below!

30 thoughts on “Paris The City Of Light”