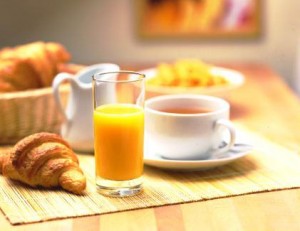 My previous article in this series was talking about French table manners and etiquette, giving you a detailed list of the do and don’ts of the French table.

The three mains meals, and should I say only meals in France are pretty much like anywhere else, breakfast, lunch and dinner.  So far nothing worth alarming anyone, right?

The big difference, however, is more in the content and the importance of each meal which ultimately affects the overall weight and health of the French population (in a positive way).  Yes, that’s how important it is.

So, let’s take a look at each meal one by one and see how the French table manner-eating habits differ from the American one.

Probably one of the main reasons why the French breakfast is much lighter than the American breakfast is because of the differences between the lunch habits of the two.

On the other hand, the French lunch is much more substantial than the American lunch.  Lunch is the biggest and most important meal in France and the meal where the largest amount of food is consummated, thus, the need for a smaller breakfast and smaller dinner.

While many people in America eat a simple sandwich or a small frozen meal or in some cases just skip this important mid-day meal all together, the French people enjoy a full meal at lunch, usually eaten anywhere between 12:00 PM and 1:30 PM.

A regular lunch usually includes an appetizer (entrée) a main course (plat de résistance) ending with cheese and/or dessert.  The meal will in most cases be accompanied by wine or water or both.

In some more rare cases beer may be preferred.  French people usually do not drink sodas or juices during a meal.  Soda is not popular in France.  Coffee is often served at the end of the meal, with or after dessert.

The everyday appetizer may include lettuce, mimosa eggs, quiche, paté and many others.  The main course will most likely include a vegetable and meat match up, a choice of five to six different cheeses to choose from and some kind of desert anywhere from a simple yogurt to some more elaborate crème brulée, flan or cake.

While the French like to eat copious lunches that will fuel their body through the rest of the day, their dinner is much lighter.  This is a big difference between the French and the American table manners and habits.  While Americans eat small lunches and therefore concentrate on the dinner with a full and much larger meal, the French dinner is lighter and for some people very light indeed.

The common every day dinner will usually not include any appetizer or desert and the main course will also be much lighter.  It could include a main course of with simple artichoke vinaigrette, a croque-monsieur, omelette, a slice of pizza, often home-made, and a salad.  A light dinner may or may not be followed by cheese with bread and/or fruits or light desert.

The most popular dinner time for French dinner is usually between 7:00 PM and 8:00 PM.

Well, snacks are not very popular in France and most adult people go by with their three regular meals with no snacks.  Snacks are more popular among children on school days with a small snack around 10:00 AM during class recess and 4:00 PM in the afternoon.

In some cases, afternoon snacks for adults would be an occasional expresso café or hot chocolate which may be enjoyed with a “jambon beurre” sandwich (the third of a baguette with two sliced of cooked ham with or without spread butter on the bread).

The French tend to eat more at lunch and less at dinner.  They do not drink a lot of sweet drinks and basically no soda at all.  They prefer wine or just water either plain or sparkling.  French people do prefer homemade food as opposed to processed food and whole meals as opposed to sandwiches.  Those are most likely the main reasons why the French population is learner than the American population in general