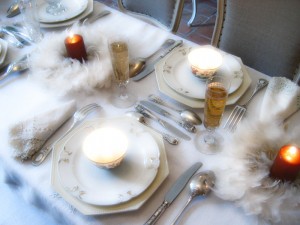 What are some of the differences between American and French table manners and etiquette?

This article will cover the main table manner and etiquette differences while a future article will cover more the food and eating habits aspect.  The reason why I know them so well is because I am French, but I also live in the United States for many years.  So, here we go, let’s see what are some of the table manners and etiquette that you need to know and to have if you are going to France, especially if you are going to be at some French host tables during your stay.

The very first table etiquette difference that jumped to my eyes when I first came to the U.S was a very common and specific one – while American table etiquette require that the hand not used for eating be placed on the laps, French table manners and etiquette requires that both hands be on the table.  Hands resting on the table shouldn’t come up to more than half the forearm (no elbows should rest on the dinner table at any time) However, both hands should rest on the table at all time.  No hands under the table at French tables.

If you are not eating, but not finish just yet, your silverware should never be placed on the table but on each side of your plate with only the handles touching the table and the fork facing down.  When you are finished with your meal, both fork and knife should be placed in the center of the plate side by side.

Does French table manners and etiquette allows you to eat with your finger?

Only French fries (which are actually from Belgium and are NOT called French fries in France) and asparagus can be eaten with your fingers, as well as bread of course.

Your bread slice should be put directly on the table cloth, not in your plate.  Cleaning up left over sauce in your plate with a piece of bread using your hands is something French people love to do at home, but which shouldn’t be done when you are a guest eating in someone else s’ house.  It is allowed to use a piece of bread to cleanup your plate, but when using a fork to hold the piece of bread. This is kind of rather impractical, but who said that French table manners always were?

French table manners and etiquette in France require that when you are asked if you want more either food or drink you answer no the first time – the host will always ask you if you want more at least one more time which you should then say yes, if you do.  Because of this “tradition of French politeness” to say no the first time you are asked, the host may ask even more than once.

This means that sometimes, if you really don’t want more you will have to say no two to three times as the host may seems like insisting strongly to serve you more food or drink.  As you know, this is not common in America, as you would say either yes, or no the first time and that’s it.  What can I say? I didn’t make that rule!

French table manners and etiquette when it comes to meal courses

Most French courses during a meal come one by one.  French people do NOT fill their plate with 4 or 5 different types of foods like Americans love to do.  Only the meat may be served with some green vegetables and eat at the same time. Salty food is NEVER mixed with sweet food and cheese is NEVER mixed with other foods, but bread.  Bread is eaten with pretty much everything except for fruits and desserts.  Dessert ALWAYS comes last – no exception.

This discussion will lead us to our next topic, which is French food habits and compare them with that of American food habits.  In the meantime I hope you enjoyed your lesson of French table manners and etiquette.