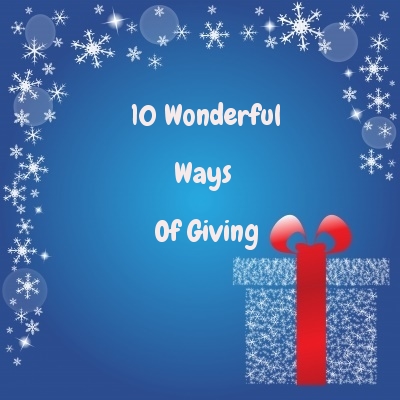 Are you a giving person?

Why do Overachievers Give more than Underachievers?

Well, as a matter of fact, we could ask the question in a slightly different way which would give you a clue.

Why being a giver will help you become more of an overachiever?

You see, people who don’t like to give come from a place of lack.  Think about it for a minute, what makes people NOT want to give?

What makes people not want to give is a lack mentality, or should I say, a  fear of lacking.  When you have a fear of lack that prevents you from giving. That’s as simple as that. And I’m not only talking about physical gifts here, as we’ll see later in this post.

Overachievers give all the time, and they also know that thee more they give the more they receive.

What is Fear of Lack?

Fear of lack is not something you can see or touch, because it’s a belief those suffering from it have deep down in their subconscious mind – it’s part of the unconscious.  Interestingly, fear of lack doesn’t have much to do with how much you have in the bank, but what you have in your head.

So which one are you?

Many Different Ways of Giving

Now when I said giving, did you think that I was talking only about giving “materially?”  Well, I wasn’t, really.

Giving physical gifts or money is ONLY a SMALL part of giving.  They are many, many other forms of giving. Here is a list of 10 wonderful ways of giving that won’t cost you a dime.

1 – You can give compliments

Of course, any normal thinking person would know that paying someone a compliment takes nothing away from them.  That would be impossible.  Yet, it’s a deep feeling that some people have – a belief that comes from lack.

If unchecked, this belief can even become a dangerous one which is called envy at best and jealousy at worst, which I don’t need to tell you are two of the ugliest conditions of the mind.

My whole life I’ve been in first row of observing what envy and jealousy do to people, and that’s not pretty. I know of some teenager girls whom given the time and opportunity could have killed me because of it. No, I’m not kidding.

Now, it’s my sincere hope that you’ve never suffered from this as those sorry teenage girls did, but if you are frugal with compliments you could give others, ask yourself why.

Do this exercise for yourself. No one needs to know that you do it, it’s just for you.  Just be honest with yourself and find out WHY you do not like to pay compliments to others even when they deserve it.

Pay other compliments when they deserve it and you’ll feel so much better yourself.

2-You can give some of your time

Do you give some of your time?

They are so many ways you could do that.  It would take a whole post just mentioning them.

You could call someone who feels lonely maybe.  You could go visit someone.  You could volunteer in doing something for your community, especially at this time of the year. How great you’d feel if you gave just a little bit of your time to those who might need it.

When you give some of your time to those who need it, you get a wonderful sense of achievement.

3-You can render a service or do a favor

The other day I’ve seen a beautiful commercial on TV where we see a young couple decorate the apartment of an old lady while she was away.  I thought that was so touching of a commercial.  There are so many, many ways you can render a service to someone.

4-You can give some encouragement

Now, if you don’t know anyone whom you could give encouragement to, I don’t know where you’re coming from, but certainly not form a place of giving.

We ALL need encouragement.  Every single person on this planet can use some encouragement, from the drug store cashier to the leader of the country.  So my guess is that you have no shortage of people around you that would appreciate your words of encouragement.

Give encouragement to others every time you can.

5-You can give a listening ear

One thing that I’ve learned to do very early in my life, unless it’s a natural quality of mine, is that I am a good listener.  So much so, that it’s tough lying to me, because I’d remember what you’ve said before.  While I love to talk, I also love to listen.

The other day a guy I barely know was shocked because I knew he was 26 years old, and he told me how do you know that?  I answered, well, because you told me once, and I tend to not forget what people tell me. He was still puzzled.  Either he thought I didn’t listen or would forget, I guess.

What about you?  Do you give a listening hear to others or do you love to hear YOURSELF talk?  That is a great question we can ask ourselves once in a while.

6-You can give others the right to talk

While this one is a bit similar to the one above, it can also stand on its own.  Do you give others the right to talk or are you talking so much that there is no room for others to talk?

It’s OK to like to talk, especially if you’re a woman, I guess, but it’s not OK to overwhelm others with your talking ALL THE TIME.  We absolutely need to learn how to keep quiet at times and give others the right to talk.

Some people have an overwhelming mouth, and boy; it’s hard to talk around them.  If this is you, please, remember to give the right to talk to others, don’t cut them off and don’t monopolize the conversation. This is part of giving to.

7-You can give someone good advice

Do you have some good advice you could give?  Well, if you are a blogger, I KNOW you do, because, us bloggers that’s what we do, we give advice, and that’s a good thing.  But what about free advice for nothing in return? Do you give others advice when and if needed, just for the sake of helping them?

Maybe someone could really appreciate your advice, as long as it’s meant to help genuinely. I give tons of advice for free all the time, what about you?

8- You can give others respect

Now, giving someone respect is so important.  Do you know that some cultures in this world don’t take respect lightly?  As a matter of fact, I would say that America is probably one of the most prominent country in the world where respect has gone berserk.  Calling strangers and older people they don’t know by their first name is very common here, but it’s not like that in Europe or Asia, for example.

I hear it EVERYDAY, and I know it’s part of the culture, but even here, in the US you can still show respect for you elders and for people in general.  Are you doing that?

If you don’t then you deserve none yourself.

9-You can show appreciation

Don’t wait to show someone appreciation until you’re dead, or until they’re dead, because it would be too late.  Show people how much you appreciate them now.  Tell them and show them.

You will make their day, and what you might not know yet is that in the process you’ll make your day as well.

10-You can give someone love

There’s a French song that says “let’s love each other while we’re alive.” I love this song, because it’s such a great reminder of how important we need to give love to others NOW.  As a matter of fact, this is one of the most beautiful gift you could ever give someone.

Show love to those you can today, because you don’t even know it they’ll be here tomorrow.

Are you a giver?

I really hope you are, because when you are, you’re happier, and more centered.

Give often and without condition, and you will receive, because it’s one of the laws of the Universe, and it never fails.

During this giving season, please, meditate on those 10 wonderful way of giving. It’s good for you.

Over to you know, what are your thought on that?