This Is A Time Of Giving But Do You Know How To Receive? 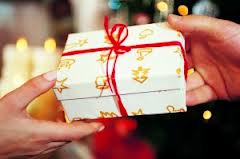 “The only gift I have to give, is the ability to receive. If giving is a gift, and it surely is, then my gift to you is to allow you to give to me.  ” Jarol Kintz

Are you shopping until you’re out of breath these days for family and friends?  The reason why shopping for others makes us so giddy is that giving is so good for the giver.  Giving generates a good feeling for the average normal person, thus, the famous Bible verse “there is more joy in giving than in receiving”.  No one could deny that, but while you are in your shopping frenzy, are you also treating yourself?  If your answer is yes, that’s great.  You should.  But if your answer is no, why not?

While Giving to Other is Great, Giving to Yourself, and Accepting Gifts from Others is Equally Important

There is no shortage of selfish people in this world who think about themselves first all the time, but there are also those maybe more rare people who are uncomfortable receiving while they don’t mind giving all the time.  So, what now, is there anything wrong wanting to give? No, there’s nothing wrong with giving as long as you also know how to receive.  If you like to give, then you need to understand that someone else might want to be able to give you as well.

Are you someone who has no problem giving, but uncomfortable receiving?  If so, you’re not alone.  But where does this feeling come from?  In this post we are going to try to answer such question.

Why is it Hard for you to Receive?

I have to say that I grew up around this behavior because my own mother while being one of the most generous people I’ve ever met to this day, she had some issues with receiving.  Of course as a child I could only observe without understanding my mother’s behavior when it came to receiving.  Today, however, it’s all so very clear to me.

People who have trouble receiving are usually suffering with low self esteem. They feel that they are NOT worthy of gifts, so it’s very hard for them to accept gifts. Not because they are thinking they don’t need or don’t want your gift, but that they are not worthy of our gift.

No one was born with low self esteem, but unfortunately, low self esteemed is learned at a young age.  As most subconscious programming it happens mainly between the ages of zero and seven, and can even be emphasized some more in later years.

What are the Reasons you have Hard Time Receiving?

There might be more reasons out there, but those are strong reasons that I’ve known to be determinant in people having hard time receiving while they have no problem giving.

If you are used to reading this blog, you now understand that what you’ve been taught as a child becomes your subconscious programming.  It just happens.  You don’t have to understand it or even believe it, it just is.

In the case of my mother, she spent her whole life not even giving a second thought about why she had issues with receiving.  She actually never even thought she had such issues. For her it just was “normal” to be that way, because as far as she knew, it was “her normal”.  The real cause, however, was because she had grown up with basically each of the case scenarios mentioned above.  No wonder she had a hard time accepting gifts, always trying to explain people why they shouldn’t have.

In my mom’s early years there was no such thing as personal development blogs and easy access life coaches to help her understand where such issue came from.  Most people would just live their lives with whatever baggage they carried around without a second thought.

Today it’s different, however, and I’m glad that I had the chance later in my mother’s life to help her open her eyes, and to show her that she deserved to receive the best gifts in the world.

Why should you Accept Gifts Gracefully?

1-      When you accept gifts gracefully you are honoring the person offering you the gift by letting them know that you appreciate their gift.

2-      When you accept gifts gracefully you are giving the right message to the universe.  If you don’t know how to accept or refuse to accept gifts you are telling the Universe that you don’t like to receive. Therefore, you are vibrating this negative emotion (of none accepting gifts) and you won’t receive according to the law of attraction.

3-      When you accept gifts gracefully you are making the giver feel good about himself or herself.

If there is more joy in giving than in receiving, there must be a receiver that is grateful and happy to receive.  There is no joy in giving to someone who refuses or makes it hard to receive joyfully.

If you are one of such people who have a hard time to receive because of your background, think about this next time someone offers you a gift, and receive such gift gracefully.  You and the person giving you will both feel much happier.

So, who are you? Are you one who can receive? Do tell us down below!

39 thoughts on “This Is A Time Of Giving But Do You Know How To Receive?”