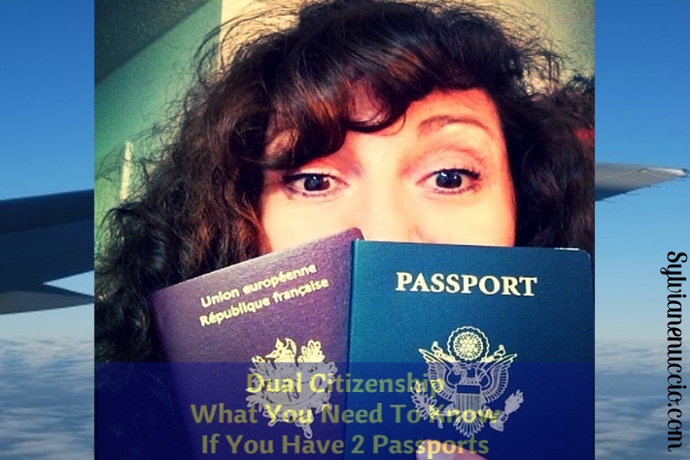 We’re standing in line at the French custom at Charles de Gaulle Airport in Paris.

There are two lines. Once has the sign French citizens, the other, Foreigners.

That’s how my husband (now ex) and I ended up in two separate lines.

I got in the French citizen line, and he had to go in the foreigner’s line.

I waited for him on the French territory side a good 15-20 minutes before he appeared.

That experience alone taught me to ALWAYS make sure to travel with my French passport wherever I travel, not only to France, but to any European country.

This is only a fun true story to illustrate how cool it is to have a passport from the country you’re going to,  but there are more serious reasons why it’s handy.

In this post I want to give you some guidance about how and when to use your passports, so you will always be better off, rather than getting yourself in a mess, because you don’t know what you’re doing.

But first let’s clarify a few things for those who don’t know about this yet.

I know it may sound strange to some people, but having more than one passport is totally legal.

I am a French citizen and an American citizen, thus I have 2 passports.

Both my French and American passports were about to expire, so I had to renew them both at about the same time.

I had to fly to Atlanta, GA this past November to renew my French passport, and I renewed my American passport this past month.

I thought that was really interesting.

So now I’m all set, and I can fly to any of the 28 European countries that are part of the European Union headache free.

What does this mean for anyone who has an American passport and a passport from any of those countries?

Well, in short it means lots of freedom and much fewer hassles.

As my true story illustrated above, with two passports, you’re bound to go through check points much faster.

It’s actually pretty cool to hear the clerk say “welcome home” both when you enter your European country and when you get back to the United States.

It makes it so well worth it to have to pay for two passports instead of one.

However, there are few important things to remember, if you’re carrying two passports in your handbag.

2 – Citizenship Benefits All Over Europe for EU Passport Holders

As a holder of a European Union passport, you are totally free to stay in any of EU (European Union) member country, as long as you want without the need of a visa.

No visa or working permit application to fill out, and no questions asked.

In my case, for example, even though my European passport is issued in France, I can work indefinitely in Italy, Spain, Germany, Ireland, the United Kingdom, and any other country of the European Union.

Not only that, but with that other passport of yours, you’ll be able to open a bank account,  potentially get health insurance benefits and even education, if you chose to do so.

Having two passports lets you choose which passport to show at any given time.

But here is the EXCEPTION…

Each time you leave and enter the United States, just remember to show your American passport.

Remember to always show that home passport in that home country.

Show the same passport if you fly from the US to a foreign country you do not have a citizenship in.

For example, if I fly from the US to Mexico, I’ll show my American passport in the US as well as Mexico.

But on the other hand, if I go to Europe, once I’m in Europe I’ll show my French/European passport.

Even though you are ALSO an American citizen, if you show your European passport on the American soil, they won’t know that, and you would require a visa.

Or worse even, like it happened to French friend of mine, you show them your French passport, and you say, Oops, I’ve shown you the wrong passport, and you get that American passport out of that other pocket, and flash it under their nose.

Well, yes, my friend sure did.

So, what happens now?

Well,  they find this strange, so they pull you to side, or even take you to a room where they are going to ask you a bunch of questions, until they realize that THEY are the idiots, and that NO, you’re not a criminal.

Hopefully, by then you did missed you flight.

This type situation does happen at times.

And it certainly did happen to someone I know. So make sure it never happens to you.

Because it’s not even relevant to them.

So be smart, and you’ll be fine.

If you were to be in a country that is foreign to both your passports, you’ll still have at least two embassies you could go to if you needed refuge, or if you needed to go there for any reason.

Just use the correct language for the embassy you choose.

As soon as I entered the French Embassy/consulate in Atlanta, it was French speaking all the way.  And when I asked that woman if I had to put the date the French way or the American way, she looked at me like I was an idiot.

Oops my bad. I agree it was a stupid question.

For a fleeting moment I had forgotten that I was on French territory.

Oh well, it can happen when you’re in Atlanta, GA.

In Some countries, Americans can be a target, while a European may not. If you happened to go to a country where Americans are not always welcome, you can always use your other passport.

This is one reason, I’m so glad I was born in a country that allows you to keep your original citizenship, no matter how many other citizenships you may acquire.

As I like to say, once French, always French.

Reciprocity fee is an entry fee that some countries around the world (usually non-European countries) are charging Americans citizens to enter their country.

The reason they do this is because the American government makes it very difficult and costly to them (their citizens), to enter the United States, so it’s give back time for them.

If you have another passport than your American one (such as a European passport), it would be in your best interest to use that passport instead to avoid that fee which can be around $150-$200 per person (at the time of this article being written) Check for update fees.

Remember – Be Smart when Using your Multiple Passport Privileges

The rule of thumb when you travel with two or more passports is to shut your mouth.

Not because you’re doing something wrong – YOU ARE NOT – it’s 100% legal for anyone two hold passports from countries that recognize dual citizenship status, but you can’t assume that the airport clerks are knowledgeable on the matter.

You’d be surprised, but a lot of times they’re not.

That’s why my friend spent like an hour in that room, being questioned like a criminal, just because he had shown two passports instead of one.

It’s only when they finally got the information that you would assume they were trained and knew about, that they let him go.

There’s only about 1% of the world’s population that is traveling with two passports. It’s not the most common thing, even in airports, so chances are your little airport clerk is not one of them, and hasn’t read this article yet.

Having dual citizenship is an extreme privilege,  and I am so thankful to be one of the few in this world to have that. But if you’re like me, you need to remember those things.

As long as I know what I’m doing, I know I’ll be OK, enjoying my citizenship(s) to the full.

So, be smart and be prepared.

But before you go, leave your comments bellow!

I know how to use my knowledge and put it in beautiful words for your business blog!