Decision Making – How Is It Impacting Your Life? 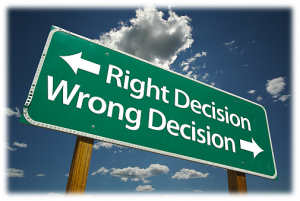 The decisions you are making everyday are impacting your life, either in a positive or negative way. This is the case of both the small as well as the big decisions that you are making.

So, in this post we are going to analyze how much decision making is influencing your life into being what it is today, and how you can make better choices in your decision making in order to change your results and gravitating towards the life that you want.

The truth of the matter is that if you are unhappy with your life right now, it has almost everything to do with the type of decisions that you are making. Changing such decision will obviously change your results.

The Power of Decision Making

This is only an example; there are many “small” decisions which have huge impact in people’s lives every day.

Personal development mentor and business man, Garry Robert, explains in his book The Millionaire Mindset that he comes from a family that was affected by heavy drinking, therefore, he made the conscious decision NOT to drink. Ever. He mentioned that for him it’s very easy to refuse an invitation to have a glass of bear on a hot summer day. Why is it easy? Because, he made the decision, ahead of time, NOT to drink, no matter what. Period.

This decision has protected him from falling into his background pattern of heavy drinking.

Everything is about decision making.  So, where do you stand in this area? How is your decision making doing? Do you tend to make good decisions or bad decisions? The results that you are reaping should give you the answer to these questions.

Not Making any Decision at All

Not making any decision at all is also decision making.  It’s making the decision not to “move forward”.  Staying in a status-quo is a decision.  Such decision may be self-imposed by fear or other issues, and this means that you need to watch your thoughts and see what is preventing you from making decisions to improve your life.

Sometimes, we can also take too long to make a decision and a great opportunity maybe passing us by because of it. This fall into the same category as not making decision at all.  Missing the bus because you got to the bus stop to late is the same thing as never getting to the bus stop at all.

Letting Other People to Make a Decision for you

This is a very big one and I know all the effects of it personally, since one very important decision I made 10 ago was based on listening to someone else telling me what to do.

10 years ago I was faced with the decision to go back home to France or stay in the United States.  My own decision was to go back home.  I had just got divorced and didn’t really have any friends and no family here.  My only family was my two cats, and I was ready to pack them up with me and fly them to France (no way I would leave my kitties behind).

So, I had made my decision, I was mentally prepared already, and I was preparing myself physically as well to get my stuff and pets ready to fly over sees.

Don’t ask me why, this will be one of the biggest mysteries of my life, but my brother convinced me that I should stay in the US, and I let him make that decision for me.

Does the fact that I “changed” my decision based on someone else had an impact on MY life?  You bet it did!  More than I would ever care to tell on this post.  While I am OK now, making the decision to stay brought me a lot of pains and sufferings over the falling  years. To some extent, to this day, I am still paying the price today of that decision made for me by my brother 10 years ago.

Do Not Let Anyone Make Decisions for You

If you let anyone make a decision for you, you will be the one paying for the consequences of such decision, not them.  No one should ever let anyone else make a decision for them.  9 times out of 10 it will be a mistake.  I hope that with my own example  you can fully appreciate what letting someone else influence your decision can have on your life.

I’ve learned it the hard way, and I would never let anyone make a decision for me anymore.  It’s always better to deal with the consequences of your own decision than dealing with the fact that you made such decision because of someone else’s influence.  If you do, you are going to beat yourself up quite a few times for having been so blind and not seeing that such decision was never yours to start with, but it became yours when you made the decision to accept someone else’s.

So, what are your thoughts?  Is decision making easy to do for you? Is it hard? Please, let us know in the comment area!

12 thoughts on “Decision Making – How Is It Impacting Your Life?”