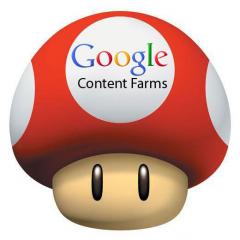 There has been a lot said lately about content farm and it has a lot to do with Google having got tired of junk content that they’ve found themselves ranking high and promoting “unknowingly”.

So, for the ones who still don’t know what content farm is, here is a the very clear definition of Wikipedia: “In the context of the World Wide Web, the term content farm is used to describe a company that employs large numbers of often freelance writers to generate large amounts of textual content which is specifically designed to satisfy algorithms for maximal retrieval by automated search engines”.

There you have it! Very clear explanation of what content farm is.  In other words,  the World Wide Web is victim of its own doing we could say.

The Web is so content hungry that more and more content has to be added each and every day on websites, blogs, article directories, forums, and other social media sites, that it has attracted an enormous amount for writers; either freelancers or not so well- intentioned internet marketers.  Unfortunately, those writers having a very strong desire to rank high have sometimes neglected every other aspect of writing.

In other words, for the sake of ranking high on search engine results, the main concern of such writers is SEO through the right keywords, while often neglecting the real content or should I say the “very content” that they want to attract the readers for.

To add to the problem, the content has to be written at an incredible record time which leaves even less room for quality content. The result of this is this: Low quality content that ranks high because it is well keyword-targeted.

This is the problem that Google is facing now and that is why they are creating tremendous changes in their algorithms.  Just this month Google announced that they were  adjusting search algorithms to provide better rankings for high quality sites.

The Biggies of Search Engines Affected

This is how biggies of the search engines such as EzineArticles, Hugpages, Associated Content, Buzzle, Articlesbase and many others have been slapped by Google big time and have seen a 60% to 90% loss in visibility on search engines.   Therefore, the reaction from EzineArticles to change quite a bit of their rules in their article acceptance such as not accepting 250 words articles anymore but raising the bar to 400 words at the minimum.

This alone is a big change for the ones who were used to write articles under 300 words for the sake of having their link above the fold.  Well, those writers who were contributing to content farm also called “low quality content” will have to rethink their strategies.

But this is nothing in comparison to the fact that this week EzineArticles has also mentioned that they were considering adopting no-follow links on their articles, not even the ones in the resource box. However, it seems that  at this time they have not confirmed this.  Thankfully it seems that EzineArticles might have changed their mind about that.

The moral of the story is that one can go so long with mediocre content on the web, no matter who they are or how important they are on the World Wide Web. If Google doesn’t think twice in punishing big sites such as the ones mentioned above they will certainly have no problem getting rid of our sites if we are not creating original, unique and high quality content.